Like so many others in this city, I am a transplant. I came to Nashville in 2015 for a job opportunity and it quickly became the place I knew I would call home for many years to come. Nashville is rich in so many ways — its cultural diversity (and subsequently its art and cuisine), its proliferation of festivals, and its many social ventures.

During my first year of grad school, I dipped my toe into the Turner Family Center waters by enrolling in the Social Impact Certificate program. Because of my positive experience with the program, I decided to go deeper this year. I applied to be a committee member on the student-led Board and was appointed to the Immersions Committee. 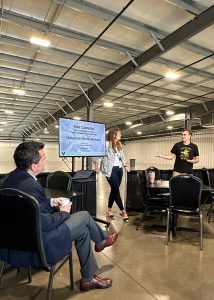 I was especially excited to be a part of this committee because of the chance to connect with social entrepreneurs working in poverty alleviation directly, and to create experiences for fellow students to do the same. Nashville has become my home and I want to know more about how to support my neighbors battling poverty. Fortunately, the first Immersion of the year was near my neighborhood in South Nashville. This Immersion experience would give me the chance to learn about development and affordable housing efforts in my own backyard. 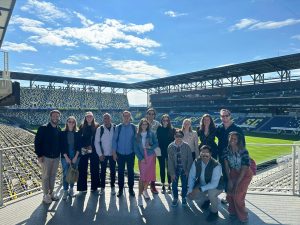 On the day of the Immersion, our student group – representing academic backgrounds including business, community development, public health, economics, and chemical and biomedical engineering – met at The Nashville Fairgrounds. There, we were greeted by Fairgrounds Executive Director, Laura Womack, Nashville Metro Councilmember Colby Sledge, and MarketStreet Enterprises Development Director Dirk Melton. Womack shared about the history of The Fairgrounds and their recent expansion, while Sledge and Melton discussed the mixed use, mixed-income project under construction at the fairgrounds. In addition to market-rate apartments, the space will include units dedicated to residents earning 60% and 80% below the median area income to help meet the city’s affordable housing needs. As part of the Community Benefits Agreement (more on that later), the development will also feature a “maker space” for local artisans. 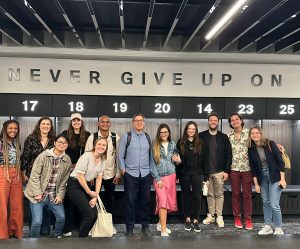 Next, we walked over to Geodis Park – home to Nashville SC, the city’s Major League Soccer team – where we were given a tour of the nearly-brand-new facilities. We saw the mural outside the locker rooms featuring the commentator sound bite from Nashville SC’s first ever goal — “The maiden goal! Made in GOLD!” — and walked the tunnel out onto the pitch. We learned that the stadium supports local businesses through its concessions, including the Nashville classic Prince’s Hot Chicken. 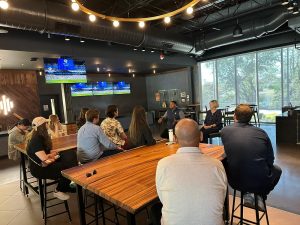 Following our tour, we sat down with Ingram Industries Executive Vice President, Mary Cavarra, and Nashville Soccer Club Head of Community Engagement, Brandon Hill. With Cavarra, we learned more about the Community Benefits Agreement reached prior to the construction of the stadium. (Community benefits agreements are contracts through which community-based organizations can advocate for and negotiate on behalf of resident interests when working with developers.) Representing ownership, Cavarra worked with a community coalition called Stand Up Nashville to come to an agreement that included, among other provisions, a $15.50 minimum wage for stadium workers (double the state minimum wage), an affordable childcare center as part of the development, and the previously-mentioned maker space for local artisans. Then, Hill discussed NSC’s Community Funds program, which provides grants to local nonprofits to support youth sports and fitness programs. I was inspired by the approach Hill described – NSC is working closely with community partners to learn and develop the types of programs Nashville needs.

Personally, I am so excited about these projects underway in South Nashville and grateful to the TFC for connecting me to these change agents doing important work in my community.