Like many small towns scattered throughout Tennessee and its neighboring states, Monteagle, TN is known for its stunning views and hilly (or perhaps, mountainous) terrain. As a town with just over 1,000 residents, it is best known for the Monteagle Mountain, famously featured in Johnny Cash’s Boom Chicka Boom album and the Jerry Reed song “The Legend” (heard in Smokey and the Bandit). Vanderbilt graduate students from both Peabody and Owen had the opportunity to get to know this small but memorable town in a TFC Trek from March 21-24th. While there, these eight students, led by student leaders Cali Livingstone (MBA ‘20) and Teddy Dinker (MBA ‘20) met with local businesses, banks, government, and more from the area. The trek offered students the unique perspectives on how social innovators in the areas of Finance, Eco-Tourism, Agriculture and Business are developing unique solutions to address pressing needs in their communities. 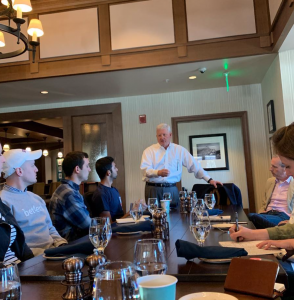 While traveling throughout the area, students not only learned from financial institutions such as Tower Community Bank and Betterfi, but also listened to organizations such as the Grundy Historic Society and the Highlander Folk School about the history of economic development and old industry in the area. In addition to the history of the region, they also learned about current initiatives been taken by businesses such as Solace Farms, which is a smaller homestead that focuses on land restoration, has a greater variety of animals (but fewer) and mostly farmers market / bath / home products that they sell locally.

To round out the trip, students also met with Land Trust of TN and Liz McLaurin to visit Sherwood Forest, Lime Mine, and Buggy Top to see the transition the community has experienced from mining industry to something new. Learning about how the Land Trust and Conservations Easements maintain the area, students also heard more on Tennessee’s state-level vision for land conservation.

After a weekend meeting with individuals from varying organizations all vested in developing their community, students left with minds full of questions and new thoughts about the way citizens could be empowered in these more isolated regions.

One student elaborated on the complexities he witnessed while discussing issues with those involved in development in rural areas: “I think I came away with more questions.  Is the fight against poverty in these rural areas really working?  It seemed like all the organizations were band-aids easing the pain of decades of communal decay.  And the community just seems stuck in this tail-spin, where potential sources of income like tourism and development are seen as threats as opposed to opportunities.”

Another noted the importance of community involvement when starting a business venture: “The trek reinforced the notion that starting an organization (or business) almost always requires buy-in and partnership with the residents of that community in order to be successful.” Rather than simply rely on those outside the community for expertise, students witnessed the importance of creating innovations alongside those individuals they would most directly affect. Partnership played a key theme in the success of any operation in rural areas – particularly among those who had previously been categorized as non-consumers. Another MBA student reiterated this point: “There are a lot of things to be considered when making any development decisions. It important to balance each party’s interests and keep effective communication.” As students learned, attempting to develop these regions, which face such a plethora of barriers, all while balancing these priorities, is no simple task.

Yet, despite the complexities associated with development in this rural region, students also found hope in the work being done 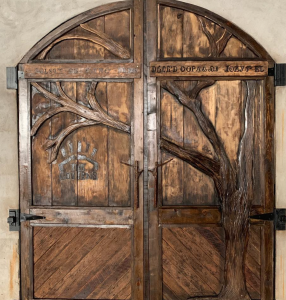 by the organizations with whom they met. “Rural areas are ripe for social innovation,” put one student. Indeed, the work being done by innovators in this region gives us hope for the way the future in even the most remote regions is heading. Learn more on the organizations themselves by clicking on the links above or drive out to Monteagle yourself to see the town that is learning to thrive despite barriers.