Over the past couple of months, I visited 41 social impact groups, primarily impact investors and social enterprise consultants in Chicago, Seattle, San Francisco and Washington, D.C. (Full list included at the end of this article). Many of those I met with asked what I had found in the other cities, so I decided to put my observations in writing. I must warn you that this is fully subject to the availability bias and is only representative of who I met with. I do not claim this to be an exhaustive or concrete assessment of the social impact landscape, but rather an expression of what I personally found during my visits.

Two reasons: 1) I need a job, and 2) university partnership opportunities. The first is the easiest to explain. I am a career-switcher exploring the social impact opportunity set and this was the best way to learn what opportunities are out there. I also had the privilege of meeting many wonderful people doing important work and got to spend time exploring some incredible cities. 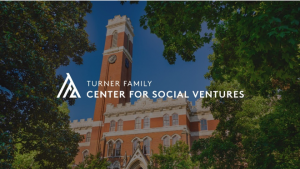 The second reason, partnership opportunities, is a function of my programming board membership with the Turner Family Center for Social Ventures at Vanderbilt University (the TFC). The TFC is an interdisciplinary organization that brings together graduate students from our business, law, nursing, medical, education, economic development, divinity and engineering programs to address poverty through market forces and social enterprises. We assign interdisciplinary teams to work on problems that social enterprises face, so I hit the road looking for organizations that might have project work or internships for our students.

Speaking of partnerships, please shoot me an e-mail if you are a social impact professional with project work or internships and are interested in our interdisciplinary group of graduate students.

What did I find?

A lot of people (myself included) with degrees from big-name universities trying to help others solve problems they may or may not have actually ever faced themselves. I found it odd that while many of the groups had explicitly named ecosystem-building activities, none revealed to me that they had community outreach programs or anything of the like to try getting in touch with the end consumers they aimed to impact socially. Nor did any group come out and say “we hired so-and-so for our investment committee or project team because so-and-so grew up in poverty and has some perspective on the work our clients want to get done.” I am not taking a shot at those doing the work, I am trying to be one of those people, I just think we may be more effective if we had the opportunity to experience or gain perspective on the issues that we hope to address.

I also found a variety of business models on par with the complexities of the problems they aim to address. From non-profit venture capital funds to for-profit consultancies getting paid with grant dollars, there is no shortage of models out there seeking to contribute to the social impact landscape. The impact investor models tended to reflect the type of capital required to suit their missions. For example, those with riskier missions may have a hybrid structure (for-profit and non-profit) so they could rely on fundraising dollars to get their funds off the ground. The consulting outfits were similarly complicated. Some followed a traditional advisory fee model, while some followed non-profit models so they could fund research and make it public in efforts to enhance the impact ecosystem. The majority of the consulting work is focused on measuring (or trying to measure) impact and increasing the effectiveness of foundations’ and investors’ impact efforts.

Since the social enterprises that are invested in and consulted for by these groups are rooted more in missions of the heart than of the wallet, the groups I met with have had to adapt. They have had to structure their own organizations to reflect the priorities of their clients and their own investors / management teams to make sure they will be able to pursue their goals without protest from shareholders. This means that as the social enterprise spectrum from non-profits to purely profit-oriented enterprises has grown more complicated, so have the companies that serve them. This is an adaptive space with myriad ways of addressing society’s pressing issues… and nothing good comes easily, right?

What are the similarities?

Everyone is worried about measuring impact, but no one has a consistent, shared method of doing it. Foundations want to know the efficacy of their impact, investors want to put a number on the social return they were promised and consultants want to help their clients do more good. However, since many social enterprises are attacking different issues in different ways, it is hard to come up with a consistent measurement methodology across groups. Plenty of groups are trying on their own, but there didn’t appear to be much coordination of efforts among the groups. 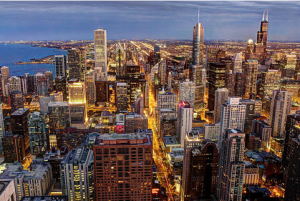 I also found that these groups were generally more aware of their employees’ personhood and needs. Work / life balance was spoken of more as a genuine concern than an empty catchphrase to lure unsuspecting MBAs into the machine. Office plans were wide open and the work structure more collaborative. Input on big decisions was sought from all ranks of employees. I also found the office environments a little more relaxed. Cuss words, blue jeans and coffee. My people.

I was also consistently informed of a mismatch between the amount of work and the amount of labor. A sea of impact measurement initiatives and client side-projects demand attention that the groups can’t spare because their bread and butter work is so demanding. As a result, many of the groups I met with have already enlisted project help from student groups and were eager to sign more up. There were also several groups increasing headcount and a couple were at least considering consolidation.

Ecosystem-building was another big focus for many of the groups I spoke with. This, like the focus on employees’ personhood, is likely a side effect of their desire to help other people through their work. Many groups host events, put out research and have team members dedicated to building networks and helping their contacts achieve impact.

What are the differences?

San Francisco has the largest number of impact investors. This makes sense, if you consider its reputation as a progressive-minded city and the concentration of capital that exists there. These circumstances understandably have created a hotbed of impact investors with varying investment theses to suit the many interests of their limited partners. This was also the city where social impact felt the least like the misunderstood little brother of the rest of the world. Most of the groups in this city occupied Class A office space side-by-side with their profit-minded counterparts and were simply in the mix with the rest of the world. I would expect San Francisco to remain a leader in this sort of work. 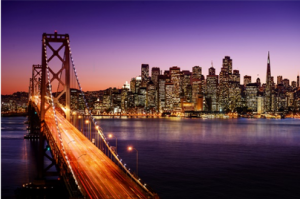 Chicago has the youngest impact scene. As a result, it also has the most attitude, which I mean in the most loving way. When meeting with groups in this city, one gets the feeling that each one of them is thinking “Screw Milton Friedman. This makes money, too.” That might just be the Chicago way of relating, but there is an admirable level of dissatisfaction with the relatively low participation rate in the city’s social impact ecosystem, which has motivated some to push awareness further. The heightened awareness has been evidenced by the increasing attendance at Impact Engine’s annual showcase, which has been significant enough of an increase to necessitate a larger venue for this year’s event, which I was fortunate enough to be able to attend. Keep your eye on Chicago.

Seattle has big dreams and plenty of momentum. This may be because there are several philanthropic giants in the city and no shortage of capital funding such endeavors, in addition to a lot of heart. Seattle is also the city where I felt the strongest sense of community around social impact. All you really have to do is walk into the Impact Hub there to feel the buzz. Many of the individuals I met with also wanted to hear about my time with other groups and to talk about what their other friends were doing whom I may not have met with yet. Seattle has the capital, talent and track record to become an even bigger force in the space. 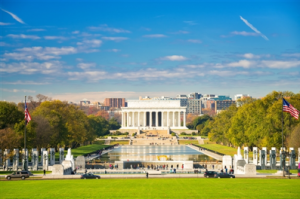 DC offered more international and government-related initiatives than the others. From international development consulting to pay-for-success financing, it makes sense that these types of models would be working out of DC. Proximity to the individuals involved in development work and running government programs is no doubt a huge boost to the effectiveness of these groups’ work. DC is poised to be the place where strides are made in cross-sector and cross-border work.

Every city has a distinct personality, but similar woes. I only wish I could have spent more time and met with more people so I could have provided you with a more thorough run-down. Hopefully you’ve gained an appreciation for what you might find in each of the cities and what makes them unique. I want to make sure you understand that:

If you are a job-seeker (or even just work in the space), I highly recommend going on a road show of your own to explore the cities and formulate your own opinions. If you decide to do that, I would love to hear about what you found. 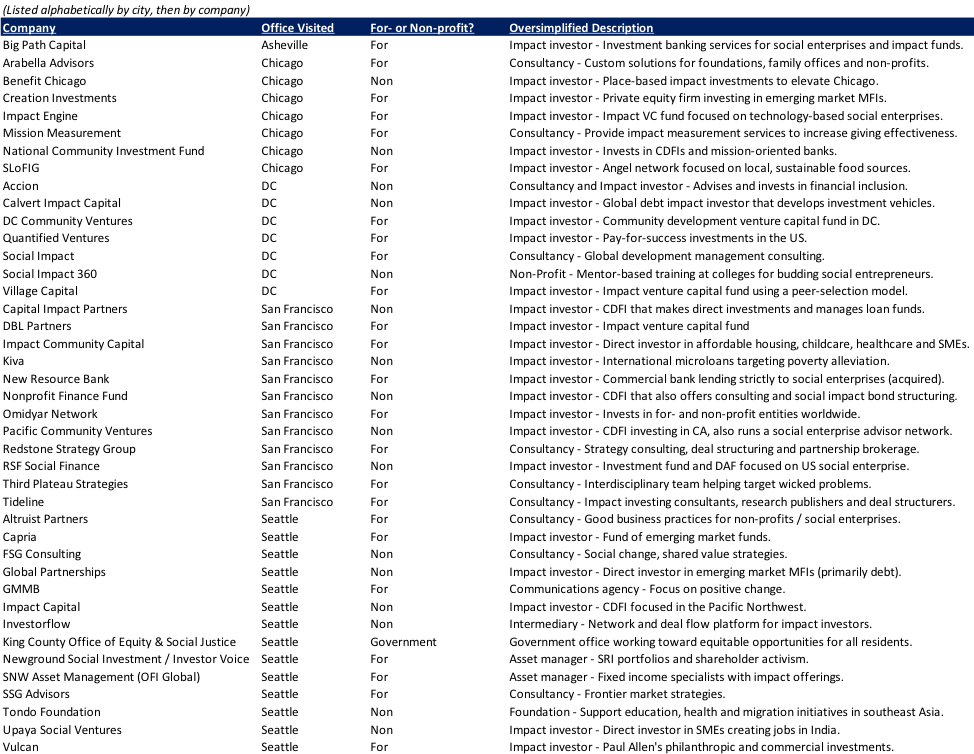 Everyone who responded to a cold e-mail and took a meeting.

Please direct all negative feedback to Mario Avila, who has been a big supporter of mine and encouraged me to write this.