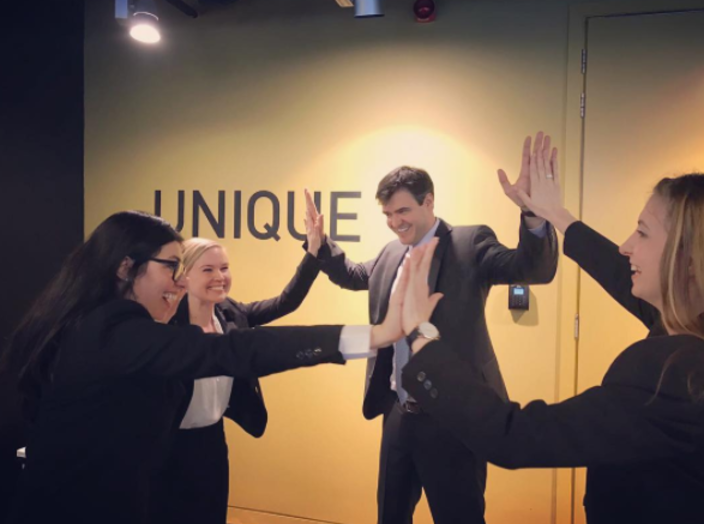 Participating in Hult@Vanderbilt through the Turner Family Center was one of the unexpected highlights of my first year at Owen. The process eventually took my team to Dubai and has continued to create opportunities and impact almost a year later.

I signed up for Hult@Vanderbilt as an individual hoping to meet people through being assigned to a team. I couldn’t have anticipated a better outcome. I got paired with another first year MBA student, Kayla Armgardt, and two second year law students, Nat Robinson and Yalda Godusi. Coming up with a solution to restore dignity to 10 million refugees over the course of five years initially felt overwhelming. Our solution had to be sustainable, scalable, and feasible. After a long night of brainstorming after Closing Bell, we eventually settled on an innovative idea using underutilized assets—off-season cruise ships—as mobile processing centers for refugees seeking asylum.

Tens of thousands of refugees have died attempting to cross the Mediterranean Sea as a result of recent conflict in the Middle East. Even those that successfully completed the journey had to risk everything by putting their lives in the hands of illegal smugglers. Our Hult solution provided a safe transit alternative while also disrupting a corrupt economy. Ships are also unique in that they adopt the laws of the flag they fly under, meaning we could take advantage of generous asylum laws in countries that didn’t border the Middle East. Using a combination of incentive alignment with ship owners, a custom algorithm to determine likelihood of asylum acceptance, and onboard service offerings, we designed a system to safely transport and serve refugees in a sustainable way.

We presented our solution to a panel of three judges in the first Hult@Vanderbilt round and then presented to the complete judging and audience panel in the finals. While we did not win the Hult@Vanderbilt event, we enjoyed our experienced and believed we were onto something. We submitted an application for the “wildcard” round of Hult Regionals (basically an online round open to anyone in the world) and were notified of our acceptance in January. I vividly remembering opening the email and holding myself up against a wall when I read that over 50,000 people applied. We worked with the TFC and local investors over the next two months to refine our pitch and prove the feasibility of our solution. Although it was a sometimes painful process, it was absolutely essential to our success!

We were one of about fifty teams in the Dubai regional competition. Many world-class institutions sent teams, including a few American Ivies. It was a privilege to get to know some of the teams from around the world. Many of them had been personally impacted by the refugee crisis and could speak firsthand to the devastation that comes with being forced to flee your home. Our first presentation was to five judges and a quarter of the teams. We got the sense that the judges connected with our mission and were trying to see how the business model could work. Later that night, all the teams gathered for the announcement and presentations of the finalists. We were announced as one of six finalists and were immediately called onstage to deliver the pitch to a larger panel of judges. We performed exceptionally well and were able to answer most of their questions in a thoughtful, informed manner. We did not win the Dubai competition but were thrilled to be selected as finalists. The night ended with a huge party on Jumeirah beach for all the teams (white linen, 50 yard buffet line, five star hotel, etc., etc.).

Our Hult journey did not end in Dubai. We’ve stayed in touch with the refugee crisis in the Middle East. Leaf, a startup funded through the TFC that facilitates financial services for refugees, came out of our idea. Our team has continued to remain friends and participated in the TFC Social Ventures Summit case competition together as well. Looking back, the Hult Prize brings out the best of what I’ve experienced at Owen: people working together for a greater good through sustainable business. I’m excited to see the solutions this year as we work to impact people globally related to energy!