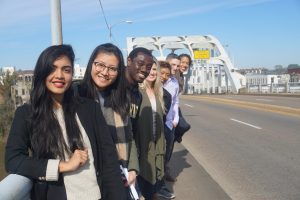 I never thought much about the state of Alabama outside of the stigmas attached to it: stigmas portrayed in the history books when we learn about Rosa Parks or Martin Luther King, and stigmas portrayed around the race relations that plague the state, as well as several others. My visit to Alabama with the TFC prompted me to think beyond this – and I was amazed.

My first hour browsing around Marion, I imagined it would be a sleepy city. But in the first hour itself, I was awakened by the rich description of the city when we met one of our friends working in Marion. And then we got to experience each one of these rich stories first-hand.  When I say rich, I refer to the humbleness of the people who used their education and skills to help uplift the city. I refer to the community bond that prevails there, which allows for small businesses to grow and take a step towards a thriving economy. I refer to the high school teachers and principals who give up on opportunities to work in bigger states and dedicated themselves to ensuring the well-being of every kid in their school. I refer to the historical stories that the museum guides tell each day so enthusiastically, filling the visitors with amazement  – and contemplation and sadness and a thousand other feelings – as if they were a part of it. I refer to social workers, who face unfortunate subtle racism, but still devote to themselves towards a better society in the state.

Another shock for me? Hunting is a popular past time in Marion. Coming from a country where it is illegal to hunt, where there was a nation-wide debacle of celebs hunting and getting imprisoned, I still find the casualness of this activity so fascinating.

Having said all of these things, of course Vanderbilt students know how to have fun, too. Though I missed the karaoke night, I enjoyed it via the stories over some delicious coffee and waffles the next day. As boring as spending a night at a bookstore sounds, it was one of the most fun nights that we all had: dancing to tunes playing from some really old vinyl records after a toothsome Mexican dinner and drinks. In its own charming ways, the state offered us fun nights to wear out the heaviness of every day.

I now want all my friends to know that when they come to Alabama, they will get a chance to meet some of the kindest people, who have given up their cushion-y jobs to work towards realizing the potential of Marion. That in Selma, they will get a chance to learn about stories that helped shaped the world. That they will feel so empowered in Montgomery when they interact with the work done towards the justice for those that were wrongly
convicted. And, of course, that they will stumble upon a cute little ice-cream store in Marion, run by the kindest woman, and that will really make their day. And I want them to know the most important advice, that is to NOT MISS the pecan pie while you are out there; it changed my life.

I left the state with a feeling of curiosity to see places like Marion and Selma stepping into tomorrow with the same rich character they embodied in their historic past. I also left with a feeling of gratitude after meeting and interacting with some wonderful people. With a motivation to be kinder, to go out there and do all that I can. And a bit of disappointment that my time with TFC was coming to an end as I move back to Deutschland to finish my studies.